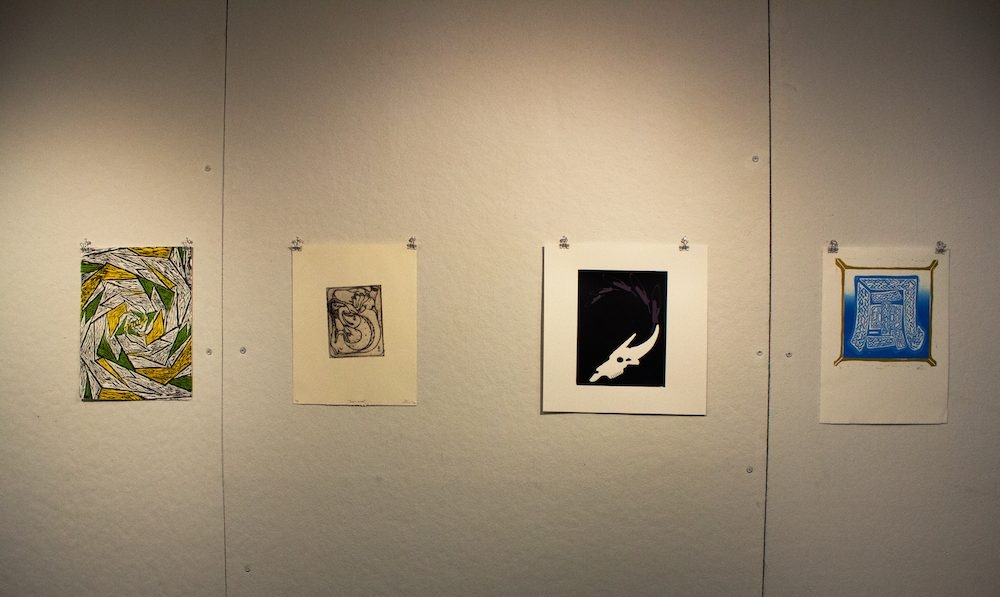 The art pieces displayed outside of the printmaking studios are available for students to purchase. Photo by Johanna Alonso.

Most of the student works that hang along the walls of the Fine Arts building are accompanied by instructions not to touch them. But there exists one exception: On the building’s second floor, there is a hallway where passersby are not only allowed but even encouraged to take art off the wall and bring it home (for a small fee, of course).

“Sometimes students forget to pick up their artwork at the end of the semester,” explained Chris Peregoy, the art print program manager. Each student has about a week after the semester ends to gather their work from the studios, or else it will be collected by the department. “We had three or four drawers of prints and we didn’t know what to do with them.”

That’s what inspired the visual arts department to start a fundraiser in which anyone could buy art that had been “donated or left here over the years” by students using the printmaking facilities, according to the signage that accompanies the prints. To purchase one, students need only to take the print off the wall and bring it up to the art print office on the third floor of Fine Arts. There, they can pay using their campus card. Each print costs five dollars.

“Teachers asked, ‘Why don’t we sell [the prints] for ten or fifteen dollars?’ Well, students wouldn’t buy them then,” Peregoy said.

Right now, the department is putting the money they make directly back into benefiting the printmaking studio. It is being used to fund a sample book demonstrating what different types of printing processes look like when used on different types of paper. Peregoy estimates that this fundraiser has raised around 140 dollars each semester since it was started.

Alayna Cavey, a senior financial economics and intermedia dual degree who is currently enrolled in several printmaking classes, sees another benefit to the fundraiser: sustainability. “I think that it’s a great idea to raise money for the department since the other options for these are to throw out or recycle where possible,” she explained. “This cuts down on paper waste and also gives pieces of student art a second chance.”

Printmaking classes fall under the visual art department’s print media concentration, headed by associate professor Irene Chan, though students with different concentrations can also use the courses to fulfill their requirement for an upper-level studio elective.

The variety of prints on display in Fine Arts can be attributed to the wide range of projects Chan and the other printmaking professors assign to their students. For instance, one of Chan’s assignments in the introductory printmaking class instructs students to base their print on a quote about the number zero. Another asks that they design a print inspired by one of the many descriptions in Italo Calvino’s book “Invisible Cities.”

“What’s really nice is, within each class project, there’s a lot of room for individuality, because the way that they do it could be so different from another class member,” Chan said .

Another of the biggest draws to the printmaking classes is the ability to work with and share equipment with other students. “It really is a community space. People tell me they’re used to working on their own — it’s really solitary,” Chan explained. “But when they take a printmaking class, they share the studio, they share the space.” This also allows students to help one another when they are having difficulty with the equipment and need help troubleshooting.

Chan encourages students who are interested to consider a print media minor — even if they’re not visual art majors, and especially now that the visual arts department is in the process of getting rid of the portfolio requirement for minors. “It makes it really interesting when people who are taking classes are other majors,” she said. “They bring a different sensibility, and different experiences.”

For more information, contact Irene Chan via email at ichan@umbc.edu. And to pick up a work of art to take home, visit the Fine Arts building, where the prints can be found in the hallway outside of the printmaking studios (rooms 207, 208, 216 and 218).