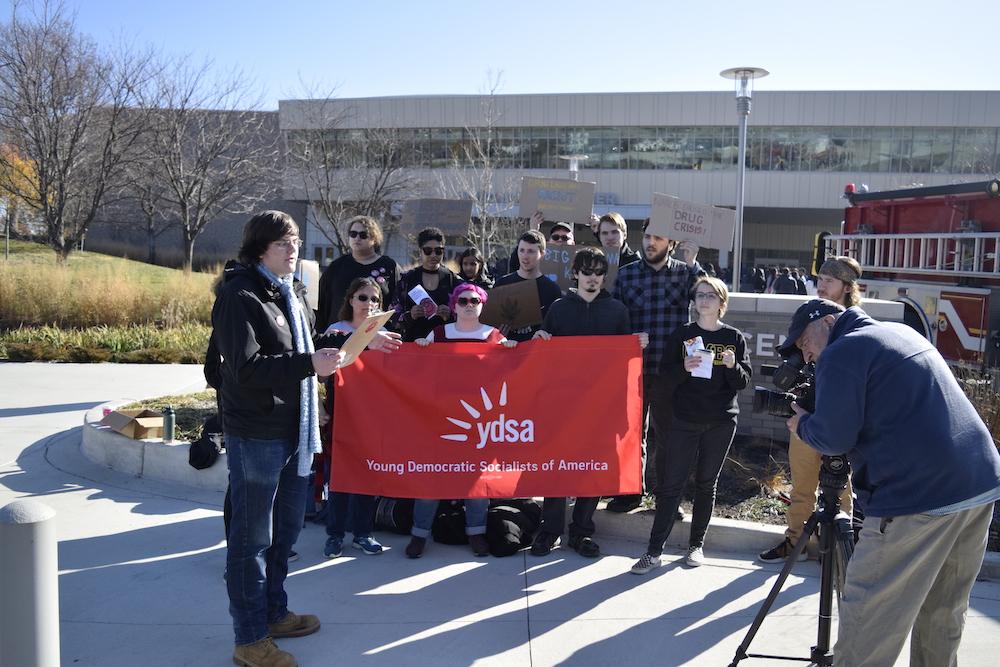 With the 2020 presidential election less than one year away and primary elections in April, civic-minded organizations on college campuses are once again preparing to advocate for their candidates.

At the University of Maryland, Baltimore County, three student organizations are best known for their political activism: College Republicans, College Democrats and the Young Democratic Socialists of America.

The newest of these organizations, the YDSA, was officially recognized by UMBC on Nov. 14, although members began organizing the chapter last spring, according to senior global studies and philosophy major Nate Stewart, who serves as the president of the organization. There are currently a “couple dozen active members” in the club in addition to an email list of about 50 people, and Stewart expects “big growth” for the organization next semester.

In their short time on campus, the YDSA has stuck to their mission of “fight[ing] for social and economic justice.” The club has a committee for electoral work, which has mostly involved campaigning for Sanders. It has also partnered with Philosopher’s Anonymous to discuss socialist philosophy. In addition, it has helped organize various protests, such as the climate strike in September, and also plans to hold voter registration drives and phone banks on campus.

The YSDA even organized a protest last Tuesday, Nov. 26, when First Lady Melania Trump spoke at the Baltimore Youth Summit on Opioid Awareness at the UMBC Event Center. Stewart said that club members learned of Trump’s visit to UMBC the day before the event, so they voted to postpone their regular business in order to prepare for the protest at their general body meeting on Monday evening.

A “few dozen” people gathered outside of the Event Center on Tuesday morning to chant and promote the YDSA and Medicare For All, which Stewart said the YDSA believes “is a policy that addresses the opioid crisis in a way that the Trump administration both cannot and will not.” The protest garnered attention from the press and the children who were bussed in from schools in Baltimore City for the event, who Stewart said “responded very well” to the protest by taking pictures with the protestors and even joining in the chants.

For left-leaning students uncertain that the YDSA is the right organization for them, the College Democrats provide another outlet for political expression. The College Democrats are a group of “Democratically-minded students who like to talk politics and make change,” according to Cameron Walkup, a senior geography and environmental studies major who serves as the president of the organization.

The UMBC College Democrats is part of the College Democrats of Maryland, which has eight chapters throughout the state. The UMBC chapter has been active for “at least a decade,” said Walkup, who served as the president of the statewide CDMD from January to November of 2019. Walkup added that there are “a dozen or so active members” in the club, although “hundreds” of students are signed up to receive emails.

Members of the club “support policies and candidates from across the left-leaning spectrum,” Walkup said, and the organization does not endorse any specific candidate. Instead, Walkup and the rest of the executive board members try to ensure that the climate remains “open yet supportive” during discussions.

With a plethora of presidential candidates and much at stake in this election, the organization was proactive in planning for the 2020 presidential election over the summer. “We discussed our role in educating the campus about the Democratic party, learned about what College Democrats at other universities are planning to do, and started developing ideas to increase turnout and enthusiasm for UMBC,” Walkup said.

In addition to weekly general body meetings on Monday evenings, the organization has hosted policy discussions to “learn about the presidential candidates’ positions on a policy topic” and guest speakers throughout the semester. However, the club’s most popular events are its watch parties for the primary debates. The YDSA sometimes collaborates with the College Democrats to host the watch parties, Walkup added, noting their “friendly relationship.”

As the election grows closer next semester, the club plans to continue to host debate watch parties and will also host caucus night result watch parties for “fellow political geeks who want to watch the results come in for the early states.” It will also host voter registration drives and other voter education efforts to help engage students.

Shaulis said that the College Republicans also began planning events and outreach for the 2020 election far in advance. “We’ve mostly been doing stuff like the Election Night Extravaganza,” Shaulis said. “[We’re also] trying to set up a debate with the College Democrats.”

The College Republicans and College Democrats frequently partner with the Student Government Association to host political events, and the YDSA will soon follow suit. As a non-partisan organization, the SGA only hosts events related to “making voting accessible and getting conversations started about democracy in general,” said Maia Parker, a sophomore education major who serves as the Director of the Department of Special Projects.

Parker said that the SGA has “quite a few events” planned for the 2020 election, mostly focused on the primary election coming up in April. The SGA is partnering with the College Democrats, College Republicans, the Center for Democracy and Civic Life, YDSA, SEB and the Resident Student Association for events such as voter registration drives. Additionally, it plans to offer early voting transportation again, this time on a Saturday with food and music, said Parker.

Though they represent different organizations on campus, Stewart, Walkup, Shaulis and Parker all seem to be committed to preparing students to cast educated votes in the upcoming elections. With their organizations’ events continuing into the spring semester, there are ample opportunities for students of all ideologies to participate.